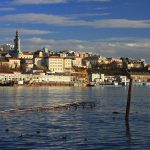 Serbia, officially known as the Republic of Serbia, is one of the six republics that were part of the erstwhile Socialist Federal Republic of Yugoslavia. This country is surrounded on its north by Hungary, on its south by the Republic of Macedonia, on its east by Bulgaria and Romania, and on its west by Montenegro, Croatia, Herzegovina, and Bosnia. Belgrade, the capital of Serbia is among the most populated cities of southeastern Europe. END_OF_DOCUMENT_TOKEN_TO_BE_REPLACED